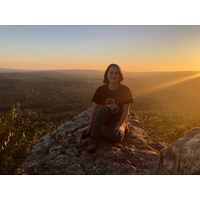 I’m Maggie, and it has been my pleasure to serve as president of Friends of Paraguay for the past eleven months. I’d imagine that most of the thousands of RPCVs from Paraguay, myself included, had never even considered Paraguay among the places we might visit before joining the Peace Corps. Because of the Peace Corps, I grew to love many people and a country that I would have otherwise likely remained ignorant to.

I, along with the rest of G-48, arrived in Paraguay in September 2015. Some of my very first Guaraní lessons revolved around the weather -- haku (it’s hot) and oky (it’s raining) are among the handful of words I still remember in Guaraní. I put those words to use frequently in conversations with my host family and Peace Corps’ incredible team of language and culture facilitators.

The night before our swearing in ceremony in early December, one of the strongest storms in recent memory passed over the Central department, causing power outages and making travel difficult -- if not impossible -- due to downed trees and power lines. That our swearing-in ceremony was only delayed by a few hours speaks to the ingenuity of Peace Corps staff.

Extreme weather events like storms, droughts, and unusual temperatures continued to mark my time in Paraguay. There were the twenty-one straight days of rain in May and June of 2017. I spent the time embroidering an ao po’i shirt, watching the mold grow on my books, and dreaming of doing laundry on a sunny day. And after moving to Asunción for my third year extension, I experienced first-hand how the city’s streets turn to churning rivers almost every time it rains.

Climate extremes have seemed to become even more common in the two years since I returned to the U.S. While the changing climate inconvenienced me at most, it has destroyed  the homes and livelihoods of countless Paraguayans. In recent months, Paraguay experienced extreme widespread wildfires and a hotter-than-average summer (well beyond hakuiterei). And just in the past few days, I’ve read reports and seen shocking photos of heavy rains that have caused extreme flooding in Central, Cordillera, and Paraguarí departments.

My service made tangible for me the knowledge that those least responsible for climate change will suffer its worst consequences. Behind each headline about drought, fires, record heat, or flooding is a host family, a work counterpart, a friend.

While in Paraguay, I learned the phrase aportar mi granito de arena, literally meaning to contribute my grain of sand. I alone can’t stop the climate crisis or relieve an entire country’s suffering, but you betcha I am going to do my part to move the needle. Sometimes that looks like leaping into action to help create an RPCV-led fundraiser for fire relief, other times it looks like elevating the voices of young Paraguayan environmentalists through Friends of Paraguay’s monthly happy hour series, and today, it looked like writing about climate change instead of sharing one of the many happy and hilarious and heartwarming stories about my time in Paraguay. I’ll save those for next time. ​